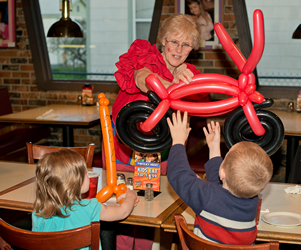 Loni was born in San Francisco, California, and grew up in Millbrae and San Mateo, both on the San Francisco Peninsula. She graduated with an Associates in Arts degree from San Francisco City College. She was married 27 years to Al Menter and they had four children. In 1975 the family moved to Idaho and Al worked for Morrison Knudsen as an executive in Boise. As her kids grew up Loni worked as a Childrens’s Party Hostess at McDonald’s restaurant in Nampa, Idaho for 17 years. Loni trained Hostesses for 3 McDonald’s Restaurants in Nampa, Caldwell, Idaho and Ontario, Oregon. Loni was left a widow when Al was killed in a car accident.

Six years later she met and married Bob Trude. For their first year of marriage they followed the teaching of Deutoronomy 24:5 that says, “When a man takes a wife, he shall not serve in the military or do any business. He shall be free for one year and cheer his wife.” So they spent their first year of marriage traveling around the country in their 30-foot travel trailer. They had a fantastic 5-year marriage until she was left a widow again when Bob died of a massive heart attack. 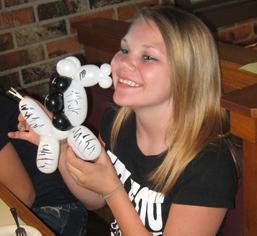 After Bob’s death Loni made balloon animals and balloon shapes for children as therapy for herself. She liked it so much that she kept learning more. It turned into a career and business in August, 2005 when Loni became the balloon artist.

She lives in Nampa, Idaho and works as a balloon artist and author. Loni takes private balloon twisting lessons to increase her skill. She subscribes to “Clowning Around” and “Balloon Magic” trade magazines so she can keep her creations new and up-to-date.

From 2009 to 2011 Loni won seven 1st place awards for her balloon sculptures. In that same time she won 16 awards for her photography. Boise Weekly featured her in their newspaper in the Feb 5-11, 2014 edition. Read the full article here. Watch her video interview here. The Idaho Press Tribune did a full-page feature story about Loni on February 19, 2012. Articles about her awards and books have appeared in other newspapers.

Loni has published a series of five books, “The Crown Jewels of Caldwell, Volumes 1,2,3,4 & 5” all signed by Governor Butch Otter, Idaho State Senator Russ Fulcher and Caldwell Mayor Garret Nancolas. They are in the Caldwell Public Library in the adult section as part of Caldwell’s history.

Loni has an unusual rapport with children that can be seen in her photographs. A producer for Boise State Television explained this phenomenon: “Somehow you are able to gain the trust and the love of these little children very quickly. That is what you are seeing in these photographs.”

Many parents say, “Loni makes it fun for kids.” She does this by involving the children when she twists balloons. For example, she has a child hold the balloons for her after she inflates them. If there is enough time, she encourages them to make a few twists themselves. The kids love it. 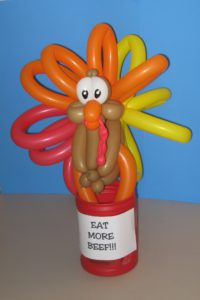 Loni twists balloon animals and other shapes for parties and events. She makes balloon centerpieces. She takes award-winning photos of children and adults with their balloons. The volumes of her books contain many of these photos.

She loves to work with clients to create new sculptures.

Loni & her work have been featured in many publications. 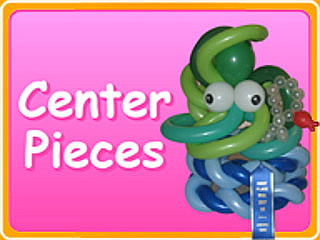 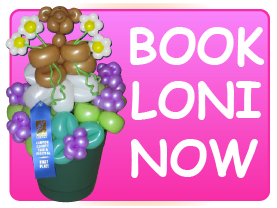 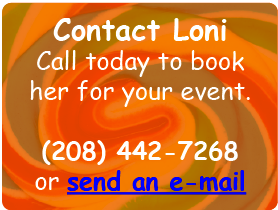 Loni was fantastic to work with! We had an event with 100+ guests and she was very friendly and worked quickly to make balloon animals for the kids. She was also very prepared even coming a day in advance to make sure she knew where our event was located and made me the cutest owl! We were so glad to have Loni at our event!